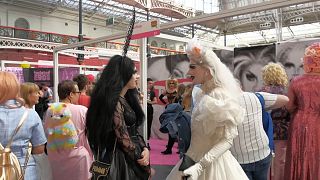 DragWorld celebrates of all things drag in London

DragWorld is a celebration of all things drag. Drag as an art form has exploded thanks to the US television series RuPaul's Drag Race. But fewer of us may know about drag kings.

From as far back as the 19th century, performances by drag queens have been popular in Europe, starting in the late 1800's as pantomime dames.

UK Drag World is one of the largest drag celebrations in Europe.