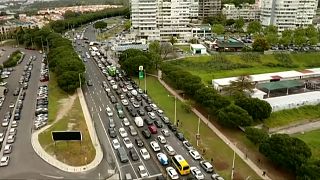 The authorities in Portugal are predicting food shortages and the possibility of petrol stations running out of fuel - a scenario that the Portuguese government wants to avoid. But there are likely to be a number of consequences by lorry drivers who transport dangerous material striking.

The warning comes from the Portuguese Prime Minister António Costa who says he is prepared to use all legal measures available: "We will have a digital cabinet meeting whenever it’s necessary to order a civil request for supplies when needed."

Costa stressed that the government has declared a ‘state of crisis’ over the strikes. That means the police and the national guard can be called upon to take action to ensure supplies are delivered.

He told Euronews: "Unions are preparing to default on a government request for minimum services. That’s obvious. That’s why they are not providing the list of workers so that companies can then allocate these workers to provide it.”

But the country’s unions, on the other hand, say it’s not up to them to provide lists of workers available. They say that they will comply with the government’s demands, but drivers will not work for more than 8 hours at each time.

Pedro Pardal Henriques is from the National Hazardous Material Drivers Association: “I make it clear, they will only do eight hours of work. And to be very clear, a person coming from Lisbon to the Algarve is much more likely to do more than 8 hours of driving.”

Union bosses are asking for the base monthly salary to increase from €630 to €900 by 2022. But employers say that with subsidies, supplements and allowances drivers already get enough money at the moment.