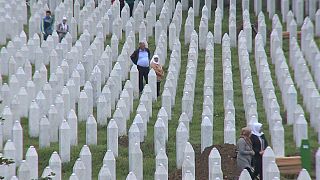 Thousands of mourners poured into Srebrenica on Thursday (July 11) to mark 24 years since the massacre in the eastern Bosnian town.

Some 8,000 Muslim men were killed and it was regarded as the worst single atrocity in Europe since World War II.

During a ceremony to mark the anniversary, the bodies of 33 victims will be given a proper burial.

The killings were carried out by Bosnian Serb forces, and several top officials, including former Bosnian Serb leader Radovan Karadzic, have been convicted of genocide at the United Nations tribunal in The Hague over their role in the massacre.