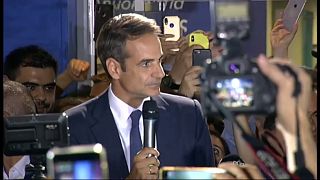 The centre-right New Democracy has won a decisive victory in Greece's snap election, beating the leftist Syriza party to win an absolute majority in parliament.

“There will be reforms implemented by Kyriakos Mitsotakis that will make the economy grow again and make a more market-friendly economy to attract investors, creating new jobs in Greece.” That’s according to Yannis Koutsomitis, a European Affairs Analyst and Managing Editor at Kappa News talking to our Good Morning Europe programme.

Koutsomitis also noted that “In the past few years the left-wing government was implementing harsh austerity but it wasn’t able to implement reforms that would make the economy market friendly.”

Conservative Mitsotakis has vowed to renegotiate the fiscal targets set by the EU on Greece's economic trajectory in the next few years. But he will have to convince European partners that he is keen to make the Greek economy grow again without deviating from the targets the Eurozone has for his country.

The man who will take office today at 1 p.m. local time (midday CET) said he received a strong mandate from the Greek electorate which will help him "change Greece" and implement a programme of fewer taxes, better salaries, more jobs and investments.

Alexis Tsipras had taken over from the conservatives in 2015 as Greece was at the peak of a financial crisis which had ravaged the country since 2010. Initially vowing to resist deeper austerity, he was forced into signing up to another bailout months after his election, a decision which went down badly with voters.

And Golden Dawn, an extreme right-wing party, lost significant ground and failed to reach the 3 per cent threshold to parliament during last night elections.