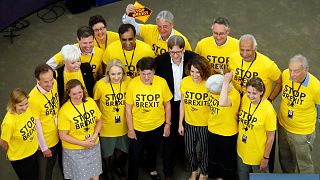 Legislators from Britain's Brexit Party turned their backs as a jazz ensemble started playing the EU's anthem at the formal opening session of the European Parliament on Tuesday, while several lawmakers refused to stand.

While lawmakers from Britain's Liberal Democrats wore yellow t-shirts with "Stop Brexit" written on them.

There was also a protest against the decision to deny Catalan separatist Carles Puigdemont from taking his seat and a demonstration in defence of the German ship captain who is being held in Italy in a standoff over migrant rights.

Tuesday marked the first day in the new five-year session of the legislature following the May elections, which set the scene for a more fractured parliament.