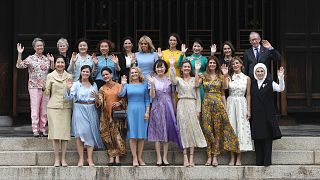 Koi feeding and rickshaw rides: G20 spouses get a taste of Japan's culture

The spouses of G20 leaders enjoyed a varied cultural programme in Osaka and the ancient city of Kyoto, Japan on Friday on the sidelines of the ongoing summit.

The group was also carried in rickshaws and had lunch at the scenic Tofukuji temple in the neighbouring city of Kyoto.

The programme took place as leaders of the G20 met to address various global issues, including concerns over economic uncertainties due to ongoing trade disputes between China and the United States.