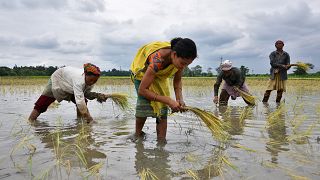 A government-backed report has announced that the India is suffering from the worst water crisis in its history.

Demand is growing, but supply is running short. Experts predict that 21 cities will run out of groundwater supply by 2020 — that includes Delhi, which is home to nearly 19 million people.

Meanwhile, the water that is available is often contaminated by chemicals or other pollution.

Cities are growing quickly, and infrastructure to deliver sanitation is lagging behind population growth. The country's growing agricultural sector is also a problem, sucking up drinkable water for crops and farm animals.

Meanwhile, Prime Minister Narendra Modi has promised that piped water will reach all Indian households by 2024. He made the announcement on Saturday among a slew of other promises off the back of his convincing re-election victory in May.

"There are multiple causes, both climate and anthropogenic, and it's important to remember that both of those are important," said Veena Srinivasan, a fellow at Ashoka Trust for Research in Ecology and the Environment where she leads the Water, Land and Society Programme. She spoke to Good Morning Europe on Tuesday.

"Of course, the drought itself is caused by a deficit in precipitation, and climate change certainly has something to do with the changing precipitation patterns. But I think it's important for us to realise as a country that we can't absolve ourselves from the crisis that we ourselves have precipitated with mismanagement, and specifically by overextracting groundwater. One of the things that the Green Revolution did was to make groundwater a possibility for millions of Indian farmers, and then allow them to rise out of poverty. But what we didn't put in place was controls to make sure it wasn't overextracted, which is why we now have a crisis when in years when we don't have precipitation to fall back on."

Cape Town experienced a highly publicised water crisis in the middle of 2017, that saw severe water restrictions imposed. But it's difficult to compare one crisis to another, says Srinivasan.

"Drought in general is a problem globally. What has happened in a lot of the western countries is they aren't dependent on agriculture for their economies and for a large fraction of their population. It's still the developing world where agriculture is the major mainstay of the vast majority of the population in terms of livelihood. And so what happens in a lot of the developed world, is when there's a drought, you're able to displace the crisis by importing fruits and vegetables from other parts of the world that may not currently be suffering from drought. And so, you hear a lot about Europe buying asparagus from South America, for example. But I think that's very different from India, where even if wealthier people were able to buy imported grain and vegetables, the larger problem is what do you do with 600 million people whose way of life and income depends on groundwater which has now disappeared."

The estimate of 600 million farmers in India is the equivalent of 50 per cent of the country's entire population, creating a cycle of water use and water shortage that puts the entire system at risk.

"We need to remember that 70 per cent of farmers and 600 million people are dependent on agriculture for a way of life. And without rain and without irrigation, there is no livelihood for 600 million people. And that could precipitate a major crisis, both in terms of security and conflict, but also what are 600 million people going to do if there's nothing for them to do in villages? And so I think that we cannot understate the severity and the magnitude of this crisis."