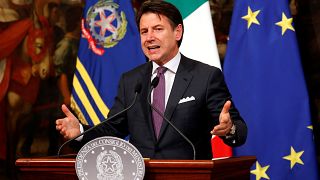 Work it out, or I'm out: that's the message from Italian Prime Minister Giuseppe Conte to the leaders of the country's governing coalition, the Five Star Movement and the League Party.

In an extraordinary news conference on Monday night, Conte called out both Matteo Salvini and Luigi Di Maio for failing to find compromise on budget negotiations with the EU, as well as what he characterised as paralysing the functioning of the Italian government.

"The political forces that determine the majority in both chambers must be fully aware of this task and of their respective responsibilities," said Conte.

"Of course, and here I want to make it clear to all citizens, I will not in any way carry blithely on or float around with the sole purpose of extending my stay here in this building, the Chigi Palace. If there is not a clear assumption of responsibility as I have requested and if behaviour is not consistent as a consequence, quite simply, with the transparency and loyalty with which I have always tried to inform my actions and in accordance with constitutional procedures, I will put my mandate in the hands of the President of the Republic."

A resignation from Conte would trigger early national elections.

The relationship between the two parties has long been strained, but the EU elections in May saw a reversal of fortunes that shocked the coalition. Matteo Salvini's League Party emerged with a convincing victory, nearly doubling the support they gained in the last EU elections. Meanwhile, the 5 Star Movement crumbled, losing around half of their support. In the aftermath, 5 Star leader Luigi Di Maio called a vote of confidence in himself to consolidate support after the shock election results. He won with 80 per cent of party votes, but the party's next steps still remain in question.

Di Maio promised a "profound reorganisation" of the party in the future, but it wasn't enough to stop speculation that the League Party may make a bid to rid itself of its coalition partner and attempt to stand up a government on its own.

One of the key points of contention is the ongoing budget dispute with the European Commission. Italy's latest budget has sparked a feud with the EU that could see disciplinary action taken in the form of a massive fine, as the country's public debt continues to rise in relation to its GDP. Sanctions will be difficult to avoid while the country is in the midst of a governing crisis.

European Economic Commissioner Pierre Moscovici reinforced the fact that rules are rules - and Italy wasn't abiding by them, in an interview on French radio.

“If they do not respect the rules at all, it will be necessary for the European Commission and the European states to take their responsibilities. Europe is also a co-ownership, there are rules that everyone must respect.”

In response to Conte's press conference, leaders of both parties have issued statements reaffirming their commitment to the coalition.