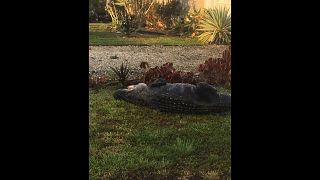 Police in Florida helped capture an alligator spotted near a school bus stop in Golden Gate, Florida on May 9.

According to the post, the 2.7-metre 'gator did a "death roll" in a bid to escape capture. “No one was injured during the wrestling match,” it added.