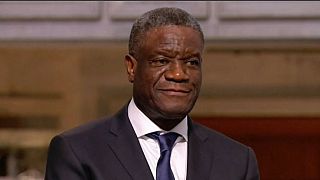 The extraordinary story of a campaigner saving rape victims' lives

He is known as Doctor Miracle and his reputation spreads well beyond his home country, the Democratic Republic of Congo. Denis Mukwege is a campaigner against the use of rape as a weapon of war - a surgeon who won the Nobel Peace Prize in 2018 for his extraordinary work.

A pioneering gynaecologist, he founded Panzi hospital in the city of Bukavu in the DRC 20 years ago. Mukwege operates on thousands of women every year, carefully reconstructing their bodies and offering psychological help after they have been raped and abused.

Congo has been torn apart since a coup in 1997 that triggered what’s widely known as ‘Africa’s First World War.’ Seven neighbouring countries intervened and hundreds of armed groups, often using child soldiers, carried out atrocities. The carnage left more than five million dead and forced more than four million from their homes. And the violence also gave birth to a rape epidemic in Central Africa. An estimated 350,000 women a year are sexually assaulted in Congo alone and Doctor Miracle’s Panzi hospital’s 450 beds are constantly full.

Violence in Africa is often linked to access to natural resources that are in high demand somewhere else such as slaves, ivory, rubber and gold. Nowadays coltan, a rare mineral used in everything from mobile phones to pacemakers, is within the warlords' sights.

According to Doctor Mukwege, gangs use rape as a weapon to drive away anybody who would dare to oppose them. He believes there really is a strong correlation between rape and the vicious cycle of mineral richness.