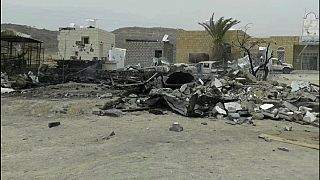 At least seven people have died in an airstrike near a hospital in Yemen's north west.

A petrol station situated near the entrance to Kitaf rural hospital was targeted, however the blast impacted the building, killing four children, a health worker and a security guard.

A further eight people were injured in the attack and two more people are still unaccounted for.

Kitaf is situated near the Saudi border, 100 km east of the city of Saada.

The attack occurred shortly before thousands of people gathered in Sanaa to mark four years of Yemen's civil war and show support for the Houthi movement.

The Iran-backed Houthis have controlled the capital since 2014 when they ousted the government of President Abd-Rabbo Mansour Hadi.

Save The Children, the NGO that supports Kitaf rural hospital, has condemned both sides for their actions in the conflict and demanded an investigation take place.

The UN estimates that more than 7,025 civilians have been killed since the war began, with thousands more dying from preventable illnesses, such as malnutrition.

A further 11,140 have been injured since March 2015, and around 80% of the country's population is in need of humanitarian assistance, making it the world's worst man-made humanitarian disaster.