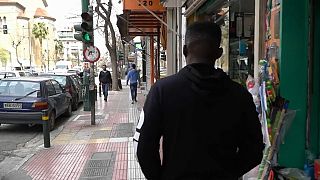 Refugees to be forced out of UN-funded accommodation in Greece

Two hundred refugees living in Greece will be forced to move out of their UN-funded accommodation by the end of March.

The government says this is a necessary step to integrate them into Greek society, but it has some refugees worried for their future.

Jean Marc has been living in an apartment with four other refugees in Athens since 2017.

His rent is paid by the UN Refugee Agency. However, the 23-year-old man from the Ivory Coast must leave by the end of this week and another refugee will take his place.

“I don’t feel very good, because I do nothing. I have no job. I go to school to learn Greek, so I can find a job, any job. But nothing until now. You know, in Athens, it’s not easy to find a job. I want to live my life here and make a family. But as soon as I leave this house, I have to find a place to sleep,” he said.

ESTIA is an Accommodation programme funded by the European Union and implemented by the UN Refugee Agency in collaboration with Greek NGOs.

It currently supports 22,636 refugees. On the 31st of March the first 200 must move out of the accommodation that was provided to them.

The UN Refugee Agency argues that this a necessary step.

“It’s not a significant number, but 200 individuals that are taken from, let’s say from the island of Samos where conditions are quite harsh and given the opportunity to stay in an apartment, where they have access to services, where they will be supported to be active in recreational activities and to study Greek. This is an important development,”

Some NGOs believe that refugees are not ready, but for now, they do not publicly express their reservations. The government notes that these people will not be abandoned.

"These refugees will continue to receive financial support for a period of three months and have the right to participate in a special work programme,” Miltiadis Klapas, Secretary General for Migration Policy said.

“They will receive a good salary. So we continue to support them, even after their exit from the ESTIA programme. We want them to feel safe in our country. We want them to integrate into the Greek society,”