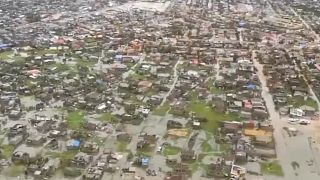 Three million thought to be affected as 'massive disaster' unfolds

The UN is warning of an unfolding "massive disaster" in Mozambique as the effects of Cyclone Idai begin to emerge.

Nearly 3 million people are thought to be affected. Hundreds are confirmed dead. Thousands await rescue and it seems that the full scale of the tragedy may not be known for months.

The trail of destruction left by Idai is evident throughout Mozambique – as people struggle with the waters to find food and shelter. The storm which swept inland at speeds of up to 170kph last week hit the country before it lashed its neighbours Zimbabwe and Malawi too.

Turning streets into rivers – the flood waters have taken over nearly 300sq kilometres of land in central Mozambique putting more than 100,000 people at risk. The Red Cross says at least 400,000 people in the area have been made homeless and its rescue efforts are hampered by the expanse of the land.

“We’re talking about a large geographical area – so it will take time to reach people. The only way to reach many of these areas is by helicopter” The Red Cross’s Matthew Cochrane told Euronews.

Cyclone Idai has been described as one of the worst ever related disasters to hit the southern hemisphere and questions are being asked this morning of its relation to global warming.

“Manmade climate change is really at the centre of this and the reason we think that governments really ought to do something about this to mitigate the impact is that if it's man made then man can change it.” Amnesty International's Muleya Mwananyanda told Euronews.