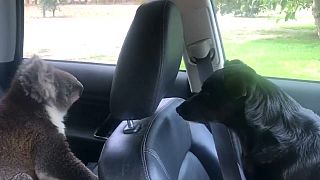 An unwelcome but adorable intruder invaded winemaker Tim Whitrow's car in Australia on Monday (March 18) and the feisty koala refused to leave, preferring to enjoy the cooler air inside.

Video obtained by Reuters showed the koala sitting in the back seat after it had entered the vehicle when Whitrow left the door open for his dog to come in and out while he worked.

He later tried to get the koala to exit his car but faced some difficulties as the koala clung on stubbornly to the dashboard.