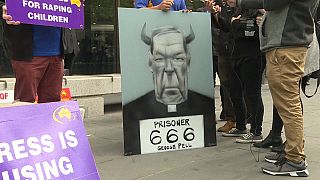 A former Treasurer of the Vatican, and close advisor to the Pope has been sentenced to six years imprisonment for the historic sexual abuse of two boys.

Australian Cardinal George Pell is the most senior figure in the Catholic church who has been convicted of sexual offences. Passing the sentence in Melbourne, the judge said Pell's conduct 'was permeated by staggering arrogance".

The Cardinal, who was one of Pope Francis's closest advisers, has lodged an appeal which will be heard by the court on June 5th. In the meantime, the Church has barred Pell from public ministry, meaning that he can't issue Mass, or hear confessions. He has also been banned from contact with minors.

The role of Cardinal is one of the highest in the Catholic church, responsible for electing new Popes, and sitting at the top of the hierachy. As treasurer to the Vatican, Pell was once the third highest ranking member of the Church.

Despite his conviction, Pell remains a Cardinal pending both the Australian court appeal process, and an internal investigation by the Church.

Claudio Lavanga spoke to the press office of the Holy See, who reiterated their statements from the conviction of George Pell. They said that the conviction was "painful, and many were shocked. The Church respects the judicial authority of Australia, but sought to remind people that George Pell maintains his innocence, and awaits an appeal date on June 5th."

Subsequent sanctions for Cardinal Pell could include his removal from the college of cardinals, and to have him dismissed from clerical state. Recently, Theodore McCarrick, the former Archbishop of Washington was dismissed after an internal investigation by the Vatican, which found him guilty of abusing both minors and adult seminarians.