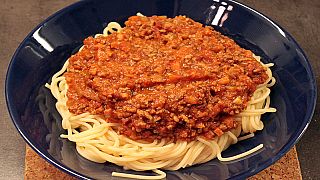 A row has erupted in Bologna, after the mayor of the Italian city criticised the dish "spaghetti bolognese", calling it "fake news".

Virginio Merola took to Twitter to deny the existence of the classic dish, traditionally comprised of a meat sauce and spaghetti.

Ahead of the opening of FICO Eataly World, the world's largest food theme park, he called out on Twitter for people to send pictures of spaghetti bolognese to him.

Bologna as a city has a strong food culture, proud of its tortelloni and mortadella ham: delicacies which many Bolognese people believe tourists should seek out, rather than asking for "spag bol".

Tourists who ask for the spaghetti-based version will likely encounter scorn from the locals, according to Italian food expert Helena Kyriakides: "A lot of tourists who come here do seek out bolognese, 'spag bol' if you like, although I hate that word. They get 'tut-tutted' at restaurants, tongues clicked, and 'oh my goodness no, we can't give you spaghetti bolognese', because spaghetti just isn't a type of pasta that we make in this region."

Speaking after his Twitter post, Mayor Merola clarified: "It is strange to be famous all over the world for a dish that isn’t ours.

‘Of course, we are happy that it draws attention to our city, but we would prefer to be known for the quality food that is part of our culinary tradition."

The official recipe for bolognese registered in the area features milk and white wine as part of the recipe, a far cry from the tomato-based sauce many people associate with the name.

In Italian, any meat-based sauce is known as a "ragu", and it is this dish, served with tagliatelle, that you are more likely to come across in Bologna.