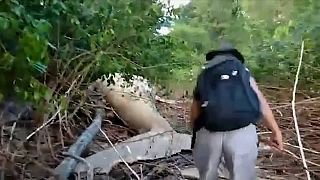 Amazon whale carcass and Trump-Kim summit 2.0: No Comment of the week

A group of fishermen spotted a humpback whale carcass stranded in the mangroves with its belly facing upwards on the edge Brazil's Amazon rainforest.

The NGO Instituto Bicho D'Agua said the whale had already died around five days before reaching the shore, and the high tide had pushed it deeper into the mangroves before it became fully trapped.

Elsewhere, the Niagara Parks Police Service on Sunday filmed a rarely seen phenomenon in the Canadian town of Fort Erie. The video shows a block of ice pushing up from Lake Erie over a while creating a roadside pile of ice.

In Syria, scores of civilians continued to be evacuated around from Baghouz, the last area held by the so-called Islamic State on Monday.

Trump said the Vietnam summit ended abruptly because North Korea wanted all US-led sanctions lifted, something the US president described as "unacceptable."