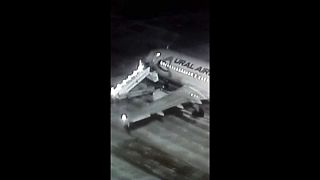 Several people were injured on Tuesday when stairs leading to a plane at Barnaul airport, West Siberia, collapsed.

CCTV footage captured the moment of the collapse, which saw six passengers fall from the airstairs while boarding the plane.

The incident occurred at 7.20 am local time on the Moscow-bound flight, according to the West Siberian Transport Prosecutor's Office.

Three of those involved have been hospitalised with moderate injuries, but their lives are not at risk, the URAL airlines press service reported on Tuesday.