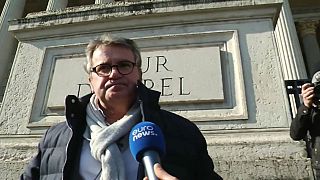 Mr. Bretzner said: “All of the illnesses evoked by Paul François do not exist. It’s not us who is saying this, it’s the judicial experts and it can be easily verified when reading the experts report. No fault can be attributed to Monsanto on any grounds whatsoever.”

It’s the fourth round of legal proceedings between the two sides which have been going on for 12 years.

54-year-old Paul François from Charentes in south-west France wants Monsanto to be held responsible after he became ill from inhaling fumes from herbicide, Lasso, in 2004.

The incident, he said, left him with recurring head-aches, stammering and neurological problems which led to countless months spent in hospital.

He still suffers, he says, from a weak immune system.

Mr. François had already won two rulings which found Monsanto liable for the poisoning. But a second appeal by the now Bayer owned company ended with France’s highest court overruling the previous decisions and ordering a new hearing.

Yesterday’s proceedings took place in Lyon where a decision is expected on April 11.

Mr. François said he was determined to keep fighting and the people present at the hearing gave him the courage to carry on.

Speaking after the court was adjourned, his lawyer, François Lafforgue, said:

"Once again, we witnessed the strategy of Monsanto, one of denial, of contestation, and bad faith. This is an opportunity for the appeal court to put an end to this kind of practice, to this logic according to which major producers, major groups, should be exonerated from any responsibility under the pretext that they don't have sufficient knowledge of the risks to which they expose their consumers."

The case is the first of its kind in Europe, as cases continue to mount against Monsanto.

In the US, a former school groundskeeper dying of cancer won over 350 million euros after claiming the company’s weedkiller, Roundup, contributed to his illness.

A jury found the company should have provided a label warning users of the potential harm to health and said it acted with ‘reckless disregard from human life.’

_Euronews journalist, Valerie Gauriat was at the courthouse in Lyon yesterday. Watch her report in the player above. _