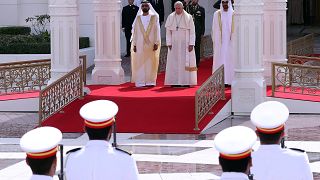 The head of the Roman Catholic church is in the United Arab Emirates for a historic three-day visit.

Pope Francis is the first pontiff to set foot on the Arabian Peninsula.

He has described the visit as an opportunity to write "a new page in the history of relations between religions".

The Pope has been welcomed at the Presidential Palace this morning where he also met Crown Prince Sheikh Mohammed bin Zayed al-Nahyan.

Later today he will attend an interfaith conference.

He will finish the tour by holding an open air two-hour mass in Zayed Sports City Stadium, which is expected be attended by more than 100,000 people.

US Secretary of State Department, Mike Pompeo, welcomed the historic visit to the region.