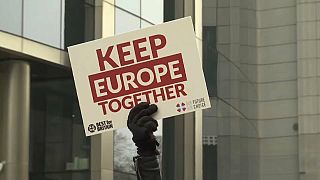 Dozens of anti-Brexit protesters gathered in Brussels on Sunday morning, calling for the UK to remain in the European Union.

The protest came as British Prime Minister Theresa May joined EU leaders for a special summit on the terms of leaving the bloc.

Demonstrators from the UK and elsewhere in the EU attended the protest.

At the summit, EU leaders approved an agreement on the UK's departure next year — the first time a member country will have left the 28-nation bloc.

The UK is due to leave the EU at midnight Brussels time on March 29.