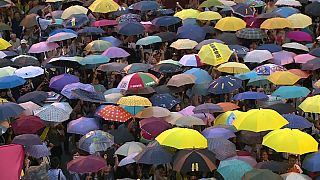 The leaders of Hong Kong's pro-democracy Umbrella Movement have gone on trial in the former British colony.

The movement's large-scale demonstrations in 2014 took control of several areas of Hong Kong for over two months.

The protestors were demanding free and direct elections in Hong Kong, which they say China had agreed to but then reneged upon.

The movement leaders have pleaded Not Guilty to public nuisance charges.

"If you look at the evidence brought against the movement's leaders, a lot of it comes from speeches and press conferences prior to the unfolding of the actual protest. The Hong Kong government took disproportionate measures including tear gas, which brought more people out onto the streets.

"We've called on the Hong Kong government to drop the charges because we think this is a politcally-motivated prosecution, asking for harsh penalties."