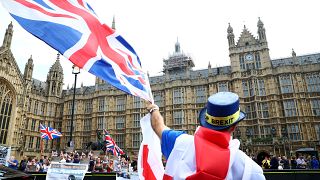 'Checkmate' for Theresa May as Brexit talks fail again

The chances of the United Kingdom and the European Union reaching a deal over Brexit are in jeopardy after talks on Sunday brought more deadlock.

Despite reports that agreement was close on the terms of the UK’s departure from the EU, the meeting between Brussels negotiator Michel Barnier and British Brexit minister Dominic Raab broke up after little over an hour with key issues – notably the Irish border – still unresolved.

‘Backstop to a backstop’: the Irish impasse

Talks remain stuck on the details of the guarantee, as agreed by both sides last December and again in March, to avoid a politically-sensitive hard border between the Irish Republic in the EU – and Northern Ireland, which as part of the UK will be outside the bloc after Brexit.

Brussels is said to want more assurances over the so-called “backstop” plan. This would come into effect at the end of a post-Brexit transition period if a future free trade deal – which would keep the border open – had either not been agreed, or did not work.

The EU’s proposal to keep Northern Ireland in the customs union and much of the single market has long been rejected by the British government as dividing the UK. Prime Minister Theresa May has insisted that a backstop apply to the whole of the UK to avoid a new border down the Irish Sea.

"We are not going to be stuck in single customs territory unable to do meaningful trade deals," a spokesman for May said on Monday.

Both sides have been trying to reach a compromise. A deal was said to have been close on Sunday, but Raab poured cold water on that idea after his sudden dash to Brussels.

British Brexiteers, meanwhile, reject an idea to keep the whole of the UK in a temporary customs union with the EU. They want a strict time limit with a clear cut-off date imposed to any such arrangement, but the EU argues this would make a mockery of the whole idea of a 'backstop' guarantee on the Irish border.

Resolving the issue is crucial to concluding agreement on the UK’s withdrawal, quite apart from future trade terms, on which there is also substantial discord over May’s so-called “Chequers” plan.

How are splits on the UK government side affecting the negotiations?

Some European politicians have expressed dismay that even at this late stage, the British government is still negotiating as much with itself as it is with Brussels.

Theresa May is under more domestic pressure than ever not to cede more ground to the EU. There are rumours of more potential resignations among Cabinet ministers – with the names of Esther McVey, Andrea Leadsom and Penny Mordaunt regularly cited.

Two former ministers who did resign in July have weighed in. Ex-Brexit secretary David Davis called on current members of the government to rebel against May’s plan, while ex-foreign secretary Boris Johnson has said that if implemented, it would amount to the greatest “national humiliation” in over 60 years.

The DUP has said a no-deal Brexit is almost inevitable, describing the Brussels talks as turning into a “battle for the union”. It opposes any new checks on goods between Northern Ireland and Great Britain and has threatened to pull support from the government over the backstop issue.

Senior Conservatives in Scotland have warned that any special deal for Northern Ireland would give unwanted ammunition to Scottish nationalists.

Meanwhile, opposition from pro-EU Conservatives in Parliament as well as other parties also threaten to derail any deal May can bring back from Brussels.

Euronews’ London correspondent Vincent McAviney said Theresa May was being compared to a chess player fast running out of moves. “For months she’s been making moves around the board, but she’s slowly been hemmed in. Now she really just has her king and she can move it one place and get in checkmate, and then back again to checkmate again – because she is totally stuck in this Northern Ireland situation,” he told Good Morning Europe.

What is the path ahead as the clock ticks down?

The UK prime minister is due to address Parliament on Monday before chairing a Brexit Cabinet on Tuesday. She is also due to hold talks with political leaders from Northern Ireland and the Republic.

May heads to Brussels on Wednesday for the EU summit, which is now likely to see leaders address less time to Brexit given the ongoing deadlock. Irish Prime Minister Leo Varadkar has said an emergency summit may be held in November.

There is less than six months until UK is due to leave the EU at the end of March 2019, by which time any deal would have to be passed by the British and European parliaments, as well as national assemblies across the bloc.