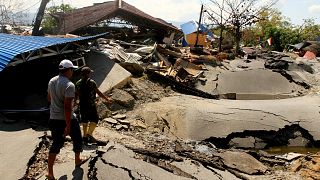 Indonesians live their lives with the expectation of earthquakes. The country is a part of the Ring of Fire, a band along the edges of the Pacific Ocean that's littered with fault lines and volcanoes just as the country's history is littered with earthquake disasters. And again, now, the search is on for survivors as the country reels from another major earthquake, just weeks after the multiple quakes and seemingly infinite aftershocks hit near the Indonesian island of Lombok.

The country has announced it will be accepting international aid, and Thailand and Australia have already offered to provide it.

"We're estimating around 1.5 million people are in the general vicinity of the area that's been affected by the earthquake and tsunami, and we're thinking that approximately 500 thousand of those people have been quite badly affected," said Thomas Howells of Save the Children, speaking to Good Morning Europe from Jakarta. "The main challenge right now is getting access to those people. We're very concerned about certain key locations like Dongala, we've not really heard much coming from there over the last 48 hours. And we've also heard reports of major landslides in a place called Sigi so we're also very concerned about that as well."

The death toll is officially over 800 and is expected to rise. Mass graves are already being dug for the hundreds of victims and rescue efforts are still underway as rescuers attempt to shift rubble with hand tools — a dangerous way of doing things, but the only way to reach the people and bodies underneath until it's stable enough for heavy machinery to be dispatched. Aftershocks are hampering rescue crews, as is the lack of equipment even where it's safe enough to use it. Indonesia's disaster agency has put out a call for more heavy equipment as well as rescue personnel. Communications are still down in many places, meaning a full account of the destruction won't be available for days.

Much of the death toll comes from the coastal town of Palu. This earthquake was accompanied by a deadly tsunami that sent waves up to 6 meters into the town, taking people by surprise — properly-functioning technology to detect the giant waves is lacking. Indonesia has sensors and buoys to sense tsunamis, but many of them are not functioning properly due to vandalism and lack of maintenance — that means in that people in Palu were caught still on the beaches when the waves hit.