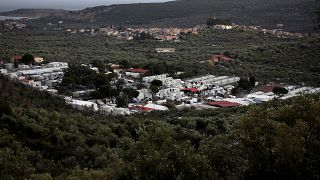 'I was shocked'—what's it like in Lesbos' Moria refugee camp?

After the media was excluded for over two years, he recounted the tour he took of the network of camps on the Greek island of Lesbos, where refugees told him they are getting "desperate" and see themselves "trapped".

'I wondered about my family and my friends, what if we were here?'

"The camp was full and there were tents everywhere. No one was smiling. Wherever you looked you could see children, so many kids wandering around.

"There was a long corridor with iron railings and men were wait in line. What for? When I asked them, they said food. Authorities know this looks bad, but before this system was inforced, there was tension and fights about who would get food."

'A village full of tents'

"Moria is not one camp any more, there is a second camp — a village full of tents. As a journalist, what do you ask people in the camp? If its cold? That's obvious, you see people looking for more blankets. I wondered about myself, about my family and friends, what if we were here? How do you spend the night here? Well, some don't have a choice."

"As we walked through the camp, I met different people including refugees and volunteers. Some refugees followed the camera around and wanted to tell their story, inviting us to their tents, others hide their faces. I totally respect this decision — they don’t want to be exposed. They don’t expect the media to help them and I wanted them to be wrong, but at the moment, I don't know.

"I was shocked, that’s the truth. I need to remember this experience, this story. Hopefully, we managed to show what is happening in Moria and do it justice."

What will the government do about conditions in Moria?

Residents told Euronews that they had to wait in line for many hours in order to get food and that there are not enough tents or blankets for everyone.

At the moment around 9,000 refugees and migrants stay in Moria – even though the camp can only host around 3,200 people.

Staikos says that in the coming weeks the government hopes to relocate 4,000 refugees to mainland Greece, which could improve the situation, especially for those who live outside the camp, exposed to cold and rain.