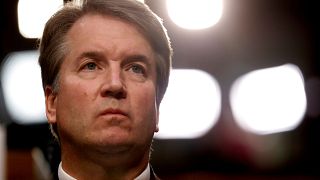 US President Donald Trump's Supreme Court pick is suddenly in twice the amount of trouble as a second accuser has come forward with sexual assault allegations from Brett Kavanaugh's freshman year at Yale.

Deborah Ramirez attended Yale at the same time as Kavanaugh. She spoke to the New Yorker about an incident she says occurred when both she and Kavanaugh were in their freshman year of college. She detailed a party in a dorm room that involved heavy drinking. It allegedly ended with Kavanaugh exposing himself to a drunk Ramirez, and coming so close that she was forced to touch his penis as she pushed him away.

Kavanaugh released a statement immediately following the public accusation denying that it ever happened.

“This alleged event from 35 years ago did not happen," the statement reads "The people who knew me then know that this did not happen, and have said so. This is a smear, plain and simple. I look forward to testifying on Thursday about the truth, and defending my good name—and the reputation for character and integrity I have spent a lifetime building—against these last-minute allegations.”

Ramirez is calling for the FBI to investigate her claims.

“I would think an FBI investigation would be warranted,” she told the New Yorker. She also acknowledged that she was drunk and had gaps in her memory as the party happened 35 years ago.

This second allegation comes ahead of a Senate committee on Thursday where first accuser Christine Blasey Ford will testify, followed by Kavanaugh.