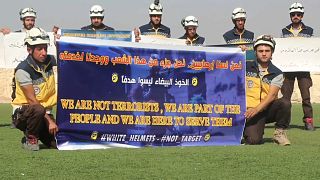 Members of the Syrian Civil Defence in Idlib province demonstrated on Tuesday over the targeting of their facilities and volunteers by Syrian forces and their allies.

On Facebook, the group, known as the White Helmets, said they were not party to any conflicts, and that their work was “purely humanitarian.”

The rescue workers protested in several towns and cities in Idlib, and held signs in English and Arabic denouncing what they called the “state terrorism” of the Assad government and its allies.