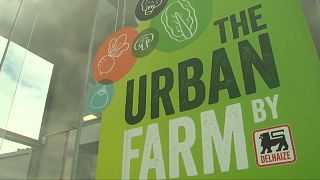 Shoppers in the Brussels neighbourhood of Ixelles are going green and eating clean as the Boondael Delhaize supermarket sells produce grown on its own roof, without the use of pesticides or preservatives.

Called the "Urban Farm", the garden contains rows of vegetables and a greenhouse for the colder months. The first salads reached the store's shelves in October last year, but production really picked up at the beginning of the summer.

The rooftop garden is the first of its kind in Belgium's Delhaize stores and is serving as a test run, a Delhaize employee said, adding that other stores could build their own gardens in the future.