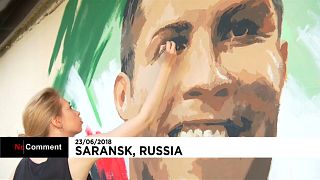 A Russian artist has paid tribute to Portugal star Cristiano Ronaldo by painting a mural of the World Cup's current joint-top goalscorer as the European champions are set to arrive in the city of Saransk ahead of their decisive final group match against Iran on Monday (June 25).

The mural's likeness to one of the world's greatest ever players attracted passersby to stop and pose for photos next to the artwork.

Antipova said she hoped the team would drive past her mural and for Ronaldo himself to see and appreciate her work.