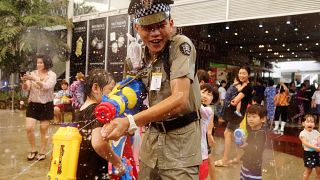 This week was a tense one where Russia was concerned. An alleged chemical attack in Syria further strained relations between the West and the Kremlin, and the daughter of Russian former double-agent Sergei Skripal, who was poisoned in a nerve agent attack on her and her father, was released from hospital.

Russian paratroopers from the country's Eastern Military District's reconnaissance unit were shown in footage published by the Russian Ministry of Defence Tuesday holding tactical drills in the Primorsky region — a coastal region in the country's far east.

Elsewhere in the world, slippery conditions made the unique and demanding UK wife-carrying championships even more challenging as participants traversed the course in Dorking, south-east England, on Sunday.

Thailand marked the beginning of the Annual Songkran festival with a water fight on Thursday.

And finally, a topless female protester charged at disgraced 80-year-old American comedian Bill Cosby Monday as he walked into a Pennsylvania courthouse for the first day of his retrial on indecent sexual assault charges.

The woman shouted “Women’s Lives Matter,” and had Cosby's name and the names of his accusers scrawled on her body.