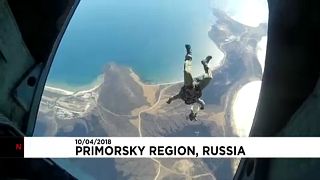 Paratroopers from Russia's Eastern Military District's reconnaissance unit held tactical drills in Russia's Primorsky region on Tuesday. The region is situated in the far east of the Russian Federation and is a coastal region on the sea of Japan.

A video published by Russia's Ministry of Defence shows the paratroopers parachuting down from a Mi-8 from a height of about 2000 meters, according to the Ministry.

Using Arbalet-2 type parachutes, the servicemen aimed to land in a limited designated area, the footage shows their jump from the airplane, the moment they deploy their parachutes and the landing.