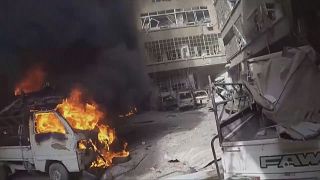 The video, said to have been filmed on Tuesday, shows damage to buildings and cars on fire. Footage also shows White Helmet paramedics removing bodies from under rubble.

Eastern Ghouta has been under a ferocious air and ground attack by government forces backed by Russian warplanes. Hundreds of people have been killed there in recent weeks, and tens of thousands have fled.