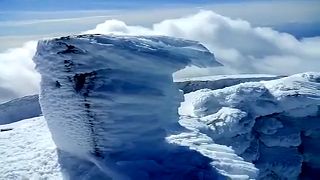 Snow is a rare thing in the Azores, Portugal. Pico Montain is the highest mountain in Portugal, and now it is covered with snow.

It is like a snow cone in the middle of the ocean, and a rare thing to see.

Pico Is a stratovolcano located on Pico Island, in the mid-Atlantic archipelago of the Azores. It is 2,351 metres, (7,713 ft), above sea level, and is one of the highest Atlantic mountains; it is more than twice the elevation of any other peak in the Azores.

"Snow at Pico Mountain is a rare thing. When people arrived today...and I told them that we were going to climb the highest mountain in Portugal...with these unique conditions.....snow at the top...and the typical green of the Azores...and then see the ocean...completly blue...It's different to everything else in the whole world," says mountain guide Renato Goulart.