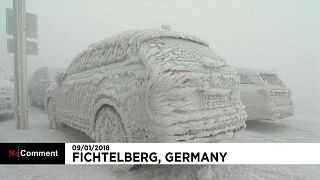 From a sumo wrestling match in Japan, to a snowstorm in Germany, our No Comment section has seen a range of stories from around the world this week.

In the war-torn Syrian capital of Damascus, shocking footage emerged of a young child crying as he was pulled from the rubble of a building.

In Japan, hundreds of people gathered to watch three of the country's highest-ranking sumo wrestlers performed an annual ritual at Tokyo’s Meji Shrine, while snow caused havoc in the German town of Fichtelberg.

In Burbank, California, a car got caught in flash flooding, riding a wave of mud, debris and water down a winding road.

Days later in Sydney, Australia, hundreds of Elvis Presley fans and lookalikes boarded a train for the annual Elvisfestival in the country town of Parkes.

Click on the player above to look back at some of the funniest, saddest and most shocking videos from around the globe this week.