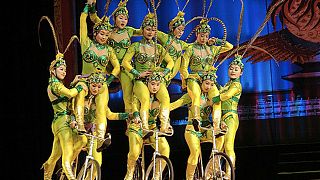 The 10th China Acrobatics Golden Chrysanthemum Contest kicked off in Penglai in the eastern Shandong Province on Saturday, with China’s best acrobats coming together in a showdown.

At the contest’s opening ceremony, 12 performances were staged ranging from song, dance and acrobatics to comedy.

However, the real contest began on Sunday and Monday, with over 500 acrobats from the country’s 28 best acrobatics troupes delivering performances in a bid to win the nation’s most celebrated prizes in the field – the Golden Chrysanthemum Awards.

Bian Faji, chairman of the Chinese Acrobats Association, said the competition would be tough with over 30 performances bidding for 10 awards.

“There are only 10 award categories, which means the contest is likely to be much tougher than all the previous ones. Thus our association encourages innovation. We must seek breakthroughs, and make new progress in innovation,” said Bian. ​