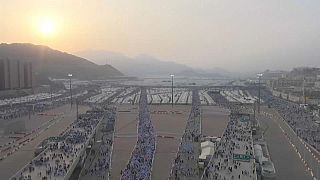 Muslim pilgrims on Saturday took part in the symbolic “stoning of the devil” ceremony in Mina as part of the hajj pilgrimage.

Hundreds of thousands of pilgrims made their way on toward a massive multi-story complex after dawn to cast pebbles at three large columns.

It is here where Muslims believe the devil tried to talk the Prophet Ibrahim out of submitting to God’s will. Mina is also where more than 2,400 people were killed two years ago in a stampede and a collision of two crowds that crushed people under the sheer weight of numbers of people fallen or trapped.

The Saudi government has since widened some roads in Mina to try and improve the safety of the hajj.

“Everything was easy in Mount Arafat, (some 20 kilometres (12 miles) east of Mecca), and in Muzdalifa, (nine kilometres (5.5 miles) west of Arafat). When we came here today it was very crowded, but all ways are open and there are no obstacles. We feel very happy, it is a great feeling. We are here to do what the prophet, peace be upon him, ordered us – to throw pebbles. We have high spirits and we seek forgiveness, and the joy we have is indescribable,” said one Egyptian pilgrim.

More than 100,000 security personnel are managing the hajj this year, assisting pilgrims and directing the massive crowds that move from one location to another in the areas around Mecca during the hajj. The five-day-long hajj is a series of rituals meant to cleanse the soul of sins and instill a sense of equality and brotherhood among Muslims.