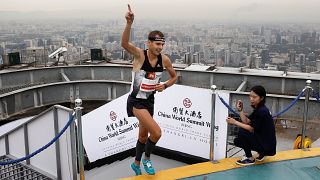 Over 900 runners from around the world competed in a race to the top of Beijing’s tallest building on Saturday, (August 26).

Over 900 runners from around the world competed in a race to the top of Beijing’s tallest building on Saturday, (August 26).

Poland’s Piotr Lobodzinski, winner of this year’s male vertical run, said he was still suffering from jet lag after only arriving from home on Friday (August 25), while the women’s winner and defending champion, Suzy Walsham of Australia, said that vertical running was an “amazing workout”.

This was the fifth time the vertical run has been held at the China World Tower.