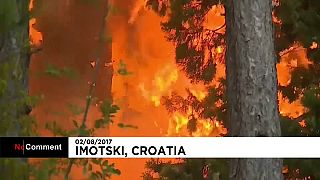 Fires destroy over 10 acres of pine forest in Croatia

A fire broke out early on Wednesday (Aug 3) afternoon near the Croatian town of Imotski, and spread over more than 10 acres (4 hectares) of forest.

Firefighters were initially unable to stop the blaze, which reached more than 30 meters in height in the dry pine forest, and called in air support to help douse the flames.

Since the beginning of summer, fires have been raging all over Croatia’s adriatic coast destroying homes and farms.

The firemen, helped by the helicopter, was eventually brought the blaze under control.