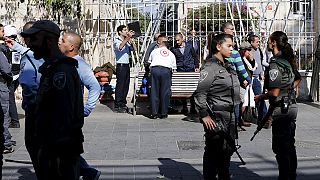 Tension and panic in Jerusalem after 'scissor attack on Israeli'

Updated: 24/11/2015
<p>This was the tension in Jerusalem after what Israeli police said was an attempt by two Palestinian women to stab an Israeli pedestrian with scissors.</p> <p>Police spokeswoman Luba Samri said a police officer saw the attack and opened fire, killing one of the attackers and wounding the other.</p> <p>Eli Bin of Israel’s emergency service said four Israelis were wounded in the incident, but not severely.</p>
no comment