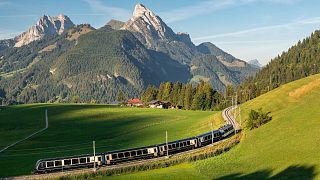 A train that can jump tracks and grow taller has launched in the Swiss mountains, 150 years after engineers first dreamed it up.

Passengers no longer need to change at Zweisimmen, but can enjoy an uninterrupted route between the two tourist towns - and an easier passage on to Luzerne in the German-speaking north.

That’s because the new models can change the gauge of their wheels and the height of their coach bodies to adjust to the different platforms on either side.

“The GoldenPass Express will become an attraction in its own right,” predicts Montreux Oberland Bernois (MOB) Railway, the company behind the new GPX trains. “During the three hours of travel, the passenger will discover some of the most beautiful landscapes in Switzerland, while enjoying a high level of comfort and gastronomy.

“The GoldenPass Express is destined to become one of the legendary trains in Switzerland, such as the Glacier Express or the Bernina Express [the highest line across the Alps].”

How does the new GoldenPass Express train technology work?

The new trains are able to switch from the metre-gauge track of the MOB to the Swiss standard gauge by adjusting the distance between their wheels.

Variable gauge mechanisms are nothing new - Spanish Talgo trains have been using them for decades - but the GPX trains stretch further, and are the first to shift between these two types of gauges. And they have another feature which makes them a world first, says MOB.

Complex trucks beneath each carriage are able to raise the height of the body to meet the higher platforms of the stations between Zweisimmen and Interlaken - which are on the Bern Lotschberg Simplon (BLS), Switzerland's largest private railway.

The GoldenPass Express “has been desired for more than a hundred years” says MOB, dating the idea back to 1873.

The dream was revived at numerous points throughout the 20th century, but was stalled by technical and financial obstacles.

Where does the GoldenPass Express go?

Now travellers can hop aboard at Montreux - with its celebrated jazz festival on the shoreline of Lake Geneva - and soon arrive at the foothills of the Jungfraujoch glaciers.

There are many magnificent sights along the way, from twisting views back over the great lake to the bucolic valleys of the Gruyères region.

The Golden Pass Express also connects the ski resort town of Gstaad on its 115.34 km route.

How much are GoldenPass Express tickets?

From 11 December, the new GPX trains will run from Montreux to Interlaken and vice-versa just once a day, leaving Montreux at 9.35am and Interlaken at 9.08am

But from 11 June 2023, travellers can enjoy a more frequent service of four return trips a day. The last trains will leave Montreux and Interlaken at 2.35pm and 4.08pm respectively.

There is also a third ‘prestige’ category, and customers in the latter two carriages are treated to locally produced food and drink. A definite perk in a country famed for its cheese and chocolate.