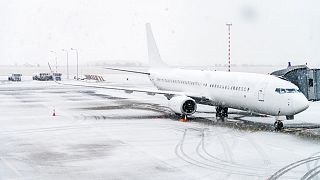 Freezing weather in northern Europe is causing major travel disruption in some countries, including the UK, where heavy snow over the weekend led to delays and cancellations at airports and on public transport.

Runways at Manchester Airport were shut on Saturday, followed by closures and flight cancellations at London’s Heathrow, Gatwick and Stansted airports on Sunday night and into Monday morning.

Disruption continued into Wednesday, with at least 75 cancelled flights to and from London’s airports affecting more than 10,000 passengers, according to The Independent.

British Airways flights to and from Heathrow were particularly affected due to airport mandated reductions, with at least 14 departing flights cancelled and 11 arrivals cancelled.

Are flights to and from the UK still affected by snow?

A yellow weather warning, indicating snow, ice and difficult travel conditions, was in place for southeast England (including London), parts of Scotland and Northern Ireland until Tuesday morning.

Gatwick Airport tweeted that while the airport is open and flights are operating, freezing weather will cause delays and cancellations for the rest of the day.

They advise passengers to check the status of their flights with their airline before travelling to the airport.

❄⚠ The airport is open and flights are operating however freezing weather will cause delays and cancellations for the rest of today. Please check the status of your flight with your airline - and local travel conditions - before coming to the airport.

According to British Airways, Heathrow Airport mandated a reduction in flights on December 11 and 12 due to weather conditions and Air Traffic Control restrictions.

As the London airport is the primary hub for the UK’s national carrier, many BA flights were disrupted.

“Like all airlines operating to or from London, our schedule has been affected by continuing adverse winter weather conditions,” the airline states.

Which flights have been cancelled today?

To minimise disruption, BA is using larger aircraft, where possible, to enable as many customers to travel as possible. They are also offering customers booked on short-haul flights from London, still operating, the option to move to a later date within the next 14 days free of charge via their website.

This article will continue to be updated.