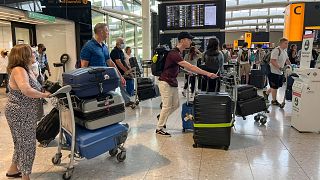 Heathrow Airport has lifted its passenger cap - but has warned that it could be re-imposed over Christmas.

Since July, the London airport has limited the number of outgoing passengers to 100,000 per day.

The cap was introduced to cope with staffing shortages, which saw the airport plagued by long lines and frequent cancellations over the summer.

The policy - initially slated to end on 11 September - was finally lifted on 30 October.

But it may be back for the festive period, the airport has warned.

A “highly targeted” cap would reduce demand on peak days in the lead up to Christmas, an airport statement indicated.

"This would encourage demand into less busy periods, protecting the heavier peaks, and avoiding flight cancellations due to resource pressures,” Heathrow explains.

Why did Heathrow airport lift its passenger cap?

Heathrow expects its annual traveller tally to hit 62 million people by the end of the year.

This is still 25 per cent fewer people than travelled through the airport in 2019.

However, it is a huge uptick when compared to pandemic-era numbers.

This summer, Heathrow struggled to cope with the sudden influx of people, leading to lengthy delays and travel chaos.

It was not the only airport to struggle with logistical issues, however.

A shortage of security staff was the main issue.

At the peak of the COVID-19 pandemic, European airports and airlines made roughly 191,000 aviation workers redundant.

Like many other airports, Heathrow has launched a massive recruitment drive to fill remaining vacancies.

Will the passenger cap impact my Christmas holidays?

From the airport’s statement, it seems that a passenger cap will be targeted on specific days. This will cause more minimal disruption than the generalised capacity limit that was put in place over summer.

Heathrow has indicated it will “work with airlines” to minimise the impact on passengers.

The busiest travel day ahead of Christmas is usually around 22 December.