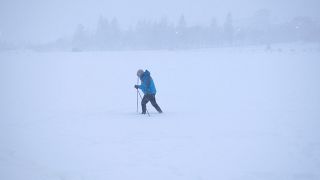 Travellers stuck at Iceland's airport worry about getting home for Christmas   -   Copyright  JEREMIE RICHARD/AFP or licensors
By Euronews  with EBU  •  Updated: 21/12/2022

Atrocious wintry weather left hundreds of travellers stranded at Keflavik Airport in Iceland after all international flights were cancelled on Monday.

With Christmas fast approaching, some fear they won't get home in time.

Roads in the area became impassable, which left both passengers and airline crew trapped at the airport.

Most roads have now reopened but the UK Foreign Office's advice remains, "There is a severe weather warning across the whole of Iceland and many roads are closed.

Icelandair have leased in two aircraft to try and clear the backlog. They described the outlook as “good” adding, “We will be working hard to run as many flights as we possibly can.

“However, we expect there may be some continued disruptions to flights due to the events of the past few days.”

Passengers say they have been left in the dark about when they will be able to fly, with many taking aim at Icelandair who have not issued any tweets since the problems began. They said they are "working extremely hard to rebook all customers."

One user put the communication problems down to pandemic losses saying, "Before COVID @Icelandair had a great customer service team on twitter that was fantastic at solving issues that came up. Sadly I have not seen it restored post pandemic." Other users said they have not been able to reach Icelandair by phone.

A Scottish traveller took to Twitter to say, "Two days since we found out our flight home was cancelled and still no update when we are going to be rebooked onto another flight."

Watch Euronews' report in the video player above to learn more.

Will climate change make white Christmases a thing of the past?

Are flights to and from the UK still affected by snow?