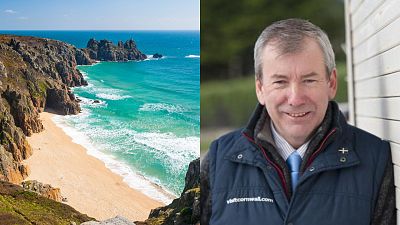 The UK’s westernmost county is a popular holiday destination, receiving millions of visitors a year.

But according to Malcolm Bell - the outgoing chief executive of Visit Cornwall - some of these holidaymakers are “f***ing emmets”.

‘Emmet’ is an old English word for ant, and is a negative Cornish slang word for tourists.

Bell slammed the crowds of people who only came to Cornwall because pandemic restrictions prevented them from going abroad.

"In the 1970s people were in Cornwall because they couldn't afford a proper holiday and there were a lot of chips on shoulders, and we felt that again in those two years.”

Bell has been Chief Executive of Visit Cornwall Destination Management Organisation and Tourist Board for over a decade. He’s retiring at the end of the year.

Why are some people in Cornwall fed up with visitors?

Cornwall is famous for its rugged coastline, turquoise waters, and charming villages.

In the summer months, it’s also known for heavy traffic and overcrowding as hundreds of thousands of visitors descend on the county.

Around 4 million visitors travel to Cornwall each year, dwarfing the region’s 560,000-strong population.

The local economy is heavily reliant on tourism - but some locals are fed up with the influx of visitors.

Cornish house prices are among the highest in the country as second-home owners drive prices up. These holiday homes often sit empty for much of the year.

Indeed, Bell - who is in charge of attracting tourists to the region - admits he once owned a hat encouraging them to stay away.

"My mother destroyed the photograph, otherwise you could have had it, of me wearing a hat with 'Go home emmet' written on it,” he said.

“That was because in about 1976 I was walking through Falmouth and these wonderful young men from Birmingham asked me where the nearest Indian restaurant was. Naively, I answered the question correctly to the best of my knowledge at the time, which was Plymouth.

“That's why there's a dent in my nose. I think they thought I was taking the Michael. So I wasn't very happy about visitors for a while."

Mr Bell backs local authorities imposing compulsory registration for people who want to rent out their properties as a holiday let.

Speaking to the Independent newspaper, Mr Bell said that his intended message had not been “correctly communicated.”

“The point I was making is there are very, very few visitors that do not like, love and care about Cornwall and they are the ones that annoy locals and do not show respect and hence getting called negatively,” he said.

“The point I pressed was that the role of a tourist board must be to target its marketing and to invite those that will appreciate and join us in a love of Cornwall.”