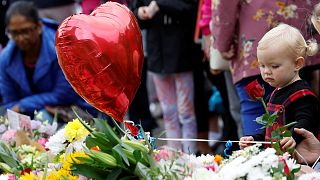 Queen Elizabeth’s death has prompted an outpouring of grief in the UK, where many mourners have gathered to pay their respects at the royal palaces.

Famous British landmarks like Buckingham Palace and Balmoral Castle - where Her Majesty passed away yesterday afternoon - have become focal points for the public. However, those that are usually open to tourists are now closed until after the Queen’s funeral.

Around the world, mourners have gathered at churches and British embassies to mark the death of the UK’s longest-serving monarch of 70 years, and figurehead of the Commonwealth.

Around 30 million tourists visit London every year, though this number has dropped since the outbreak of COVID. Many visit to explore the royal topography that makes up the capital - from Kensington Palace to the Tower of London.

For sightseers, a simple ‘No Guard Changing Ceremony’ sign outside Buckingham Palace yesterday indicated the severity of the Queen’s illness aged 96.

Having died in Scotland, plans known as ‘Operation Unicorn’ are now in motion. The Queen’s body will be taken from Balmoral in Aberdeenshire to her smallest Palace of Holyroodhouse, the royals’ official residence in Edinburgh.

There will be a procession up the Royal Mile to St Giles’s Cathedral, where her coffin will lie in state for 24 hours before being transported to Westminster Hall.

Under Operation Unicorn plans, this journey was initially planned by train - allowing people to pay their respects at level crossings and station platforms down the east coast mainline, with another train following behind to collect flowers from the tracks.

But the route described as “very complicated” by transport officials to the Guardian newspaper in 2017 may now happen by plane.

Having spent the night at Balmoral, King Charles III and Camilla, the Queen Consort, flew from London to Aberdeen today. The new, 73-year-old monarch took time to greet mourners and well-wishers outside Buckingham Palace.

Which events are cancelled because of the Queen of England's death?