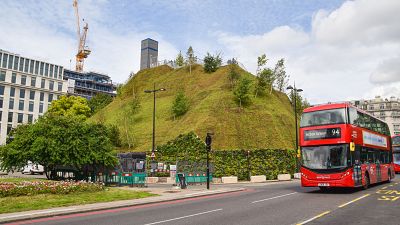 In what will surely go down as one of the worst tourist attractions in history, the new Mound in London has scaled new heights of disappointment.

No, it is not any more exciting than its name implies. It is a literal mound of dirt, piled up at the least attractive end of the busiest shopping street in London, Oxford Street. Originally designed to draw more people to London’s most famous shopping street, the top of the mound is around seven storeys high.

That means, looking towards west London which is full of interesting architecture, you can see the tops of a few trees in Hyde Park. Bearing in mind that the Mound is right next to the park, this really doesn’t justify walking up the pile of earth.

Look east, and you’ll eyeball a few of the most run-down buildings on Oxford Street. North and south afford charming vistas of the traffic-clogged streets of Park Lane and Edgware Road.

This monolith which no one asked for cost UK taxpayers €7 million, But the good news is that if you want to waste your time going up it, it’s free. After initially charging visitors £4.50 a pop to climb it back in July, the ‘attraction’ shut down within a week of opening.

Those who had paid for the pleasure of the climb were then reimbursed, and Westminster Council announced there would be free entry until January 2022, when this huge waste of money will come down.

My opinion on this low, brown blip of the London skyline is probably clear by now. But I wouldn’t leave you high and dry, dear reader. So instead, read on for much better rooftop views, many of which are also free.

This enclosed roof garden with glass viewing platforms is at the top of the building named ‘Worst Building in London’ in 2015. But bear with us.

Known as the Walkie Talkie by locals, it was given this dubious honour because it’s seen as top-heavy and ugly.

But as a way to gaze out over the London skyline, it can’t be beaten. At 160 metres high, it rises above almost all the nearby office buildings, allowing views of St Paul’s Cathedral, Tower Bridge, the Thames and the Shard.

The Sky Garden calls itself ‘London’s highest garden’ but botanists shouldn’t get too excited. It has some perfectly lovely tropical planting, but nobody is here for the flowers. It’s all about magnificent views over some of London’s oldest streets and the most beautiful sights of the city.

Best of all, tickets are free. They are released three weeks in advance, but they sell out quickly so you’ll have to plan in advance, especially if you have limited time in the city.

If you fail to nab one of the free tickets, you can still gain access to the viewing areas by booking a table at one of its restaurants and bars.

You might have heard of Regent’s Park, a beautiful park on the northern edge of central London. But what most visitors don’t know is that if you carry on a bit further north, you end up at Primrose Hill, which affords one of the loveliest views in the city.

Take a picnic blanket, a bottle of bubbly and you can join the locals, who all flop near the top to toast the city sprawling out below them.

As you nibble on your sandwich, gaze down over leafy Regent’s Park, and on to the central London conurbation beyond, including the BT Tower, the Shard, the Walkie Talkie, the London Eye and the Cheese Grater.

If you don’t know what those buildings are, it doesn’t matter. You can have fun guessing as you look out over the park to the high rises in the distance.

For an even higher park view, go further north into the huge woodland park, Hampstead Heath, and climb up to Parliament Hill. At 98 metres high, it’s the highest natural point in the city. You can see almost all of central London from it. But it’s some distance away, so bring your binoculars.

Some might claim London is expensive - and they’re not wrong. But on the plus side, almost all of the city’s museums are free.

The excellent (and free) Tate Modern museum - one of the world’s greatest modern art galleries - has equally excellent and free views of the city.

After you’ve had your fill of Pablo Picassos, Frieda Kahlos and Mondrians, take the lift to the Top Floor viewing gallery or one of the upper-floor restaurants.

From here, you can see straight across the Thames to St Paul’s Cathedral, and over to smaller historic buildings that line the riverbank. On clear days, football fans will be pleased that they can see right across to Wembley Stadium.

At a mere 1.5km away from its dirty rival, the Wellington Arch is the regal answer to The Mound’s flash-in-the-pan Insta-infamy. Built in the 19th century, Wellington Arch is, admittedly - like The Mound - in the middle of a roundabout.

But the similarities end there. The Hyde Park Corner roundabout has been transformed into a pedestrian-friendly micro park, with lawns, sculptures and memorials. As the connection point between Green Park and Hyde Park, it’s worth making a stop to explore.

To see how the rich live, though, you’ll need to pay a little over a fiver (€5) to go up Wellington Arch, but you’ll get more than a view. You get a little slice of history.

This monument dates to 1825, and as you stand atop this beautiful arch you can see the rooftops of two of London’s swankiest neighbourhoods - Mayfair and Knightsbridge. When the leaves have fallen off the trees, you can even peek right into the garden of Buckingham Palace.

You can’t climb up to see Big Ben or at least not yet. A few years ago, British residents could apply in advance for free tickets. But since 2017, the Elizabeth Tower, which houses the world’s most famous bell, has been closed as restoration works take place. And in case you didn’t know, Big Ben is actually the bell, not the clock or the tower.

Set to reopen in 2022, it’s likely UK residents will again be allowed to apply for free tickets, and there’s some speculation that foreign visitors might be allowed to pay to go up it, too. In any case, you can’t see the tower when you’re inside it, of course.

To get the best views of Big Ben and Elizabeth Tower, and the grand Houses of Parliament attached to it, head to the opposite side of the river to South Bank.

A long sweeping 2.5k promenade on the south side of the Thames, starting from Lambeth Bridge to Blackfriars Bridge, it provides lovely views of riverside London along the whole route - including of Big Ben and the Houses of Parliament. And for this skyline view, you don’t even have to climb up. Just head out onto Westminster Bridge.

But to see more of the central London skyline, head up to the terrace of the free Royal Festival Hall. As music lovers listen to concertos inside, you can look out to the London Eye wheel, the Art Deco architecture of Embankment station and to some of London’s oldest bridges.

Views with booze: spoilt for choice

If you fancy watching the sunset with a cocktail in your hand, you’re spoilt for choice. The city is filled with restaurants and bars with skyline views.

A few to wet your whistle: Radio Bar at ME Hotel, Sky Lounge at The Shard, Savage Garden at the Hilton Tower Hill, Dalston Roof Park and The Nest at Treehouse London.