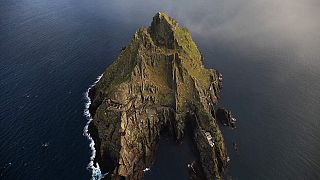 These days, a walk along the green coast of Ireland can bring a sudden feeling of deja-vu, paired with the sense that you've just walked through a magical landscape.

It's not just that the Emerald Isle has some of the most breathtaking natural wonders in Europe though. Over the years, Ireland - together with Northern Ireland - has become a prime film and TV location, especially for magical and historical tales.

"Ireland is a country that is very into creativity and the arts, culture and music, so film fits right into that, whether it's Star Wars and Game of Thrones - which are big blockbuster type productions - or whether it's the Banshees of Inisherin," says Niall Gibbons, CEO of Tourism Ireland.

"Landscape is fantastic for shooting and its very nature lends itself well to cinematography."

The production of films and TV shows in Ireland has created a new kind of tourism in the country, with fans of the big and small screens flocking to see the iconic locations. Locals are happy too.

"Local people love to have films shot in their area," Gibbons says. "For example, Disney's "Ella Enchanted" was filmed in County Wicklow, in a lovely village called Glen Tulloch.

"And the whole village was transformed for a couple of months, it became an attraction for a lot of the locals who would just go down and start to have cups of coffee and just watch what was going on," he continues.

"And it's just a bit of magic that comes to a place for a while and then moves on. But then the enduring legacy is left in the movie itself."

These are some of the film and TV locations you should absolutely visit during your next trip to Ireland.

The Cliffs of Moher

Like many wonders of nature, these cliffs, formed over 300 million years ago, have the power to spark the human imagination.

In the past, they have inspired stories of mermaids, lost cities and tragic loves, which form part of Ireland’s fascinating folklore. In modern times, they have served as the backdrop for some of the most beloved films of our times.

The 1987 American cult fantasy film "The Princess Bride" was partially filmed here, with the Cliffs of Moher serving as the "Cliffs of Insanity", which the main characters climb in a tense scene.

In 2009, the vertigo-inducing cliffs were given an even more menacing look in "Harry Potter and the Order of the Phoenix", where they feature as the hostile landscape hiding one of Voldemort's Horcruxes.

Castle Ward in Northern Ireland is the real-life Winterfell, the castle and seat of power of the unlucky House Stark in "Game of Thrones: A Song of Ice and Fire".

Much of the series - which remains the most watched in the history of TV - was actually filmed in several locations across Northern Ireland, including the Dark Hedges (known as Kingsroad by GOT fans), Tollymore Forest, Cushendun Caves, and Downhill Beach (which served as Dragonstone).

The town of Banbridge, in Northern Ireland, hosts the Game of Thrones Studio Tour, which has received rave reviews from fans.

Right in the heart of the Irish capital, sits the stunning Trinity College, Ireland's oldest university.

The college, with its gothic towers and wooden bookshelves, served as a set for a few scenes in "Normal People", the popular TV show based on Sally Rooney’s much-beloved novel of the same title.

Curracloe Strand in County Wexford became Normandy’s Omaha beach in the epic American war film "Saving Private Ryan". If you've seen the film, there's no way you would have missed it: the beach is featured in the film's 20-minute opening.

Rumours say more than 2,000 men from the Irish Defence Forces were deployed to the beach for the filming of the scene, which took two months to complete.

Skellig Michael, a rocky island off the Kerry coastline and a UNESCO heritage site, was used as the backdrop for "Star Wars: The Force Awakens".

A visit here might be tricky, but it's possible: boats only travel to the island when the weather allows it, and visitors can only stay for a few hours.

Ireland's Ancient East, the birthplace of Irish culture, which includes the likes of Cavan, Longford, Louth, Meath, Monaghan and Westmeath, was the landscape that served as the backdrop for most of the filming of the TV show "Vikings".

Lastly, a film set in Ireland that’s actually about Ireland. "The Banshees of Inisherin", the new Martin McDonagh's film released this year, set on the fictional island of Inisherin, was actually filmed between two Irish islands: Inishmore, one of the Aran Islands off the west coast of Ireland, and Achill Island near Mulranny in County Mayo.