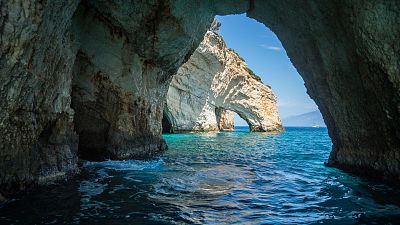 Eerie nature-carved oddities from sunken worlds, cathartic caverns and unforeseen epiphanies...you can count on any number of strange sights and sensations when visiting the mythic caves of Greece.

Caving is shaping up to be one of the hot underground trends in tourism next year, which is handy as caves seem to have been built (so to speak) with social distancing in mind.

Greece has its unique geology and morphology to thank for that. In fact, some of the most important ancient Greek myths have their roots in caves. And what’s more, the word for cave exploration in Greek is fantastic – spelunking.

The Cave of Alistrati at Serres

Let's take it from the top, of Greece, that is. That's where you'll find the Cave of Alistrati, near the town of Serres in the Macedonia region.

One of the largest caves in Europe, it has stalactites and stalagmites in different colours soaring to heights of 18 metres as well as rare formations called heccendrites, helictites and cave pearls, all adding up to an experience best described as otherworldly.

Greek myth holds that the Sphinx made an appearance nearby and also that the god Pluto absconded with Persephone here to bring her to the Gate of the Underworld.

Also called Davelis Cave, the Cave of Penteli is located just north of Athens on the slopes of Mount Pentelicus.

According to lore it was discovered by the builders of the Parthenon, who extracted marble for the temple from mountainside quarries here.

The small church at the entrance dates back to the Middle Ages, but in antiquity followers of the god Pan gathered to worship at the mouth of the cave.

Craving a cave just a hop and skip away from the Acropolis of Athens? Then the Koutouki Cave of Paiania is just the cavern for you.

This easily accessible cave is situated on the eastern slope of Mount Immitos. It’s known as Mt. Hymettus, which forms the eastern spine of the Attica basin and is what Athenians call trellóvouno (crazy mountain) because it's so darn long—16 km from end to end.

Discovered in 1928 by local residents, the cave was created in between folds of the mountain's metamorphic limestone and has many multicolored speleothems, or cave formations, with names like Harmonium, Red Waterfall and Olympic Torch.

You know that thing where writers have to "go into their cave" to concentrate and write? Well that figure of speech may have started on the Greek island of Salamina, close to Athens, in the Cave of Euripedes.

The narrow hillside cave is where ancient Greek playwright Euripedes retreated to pen his famous tragedies. The cave is about 47 metres deep with ten modestly sized chambers, in one of which a late fifth-century BC black-glaze skyphos, or two-handled wine cup was found. The cup bore letters that spelled out the name Euripedes.

The cave is located near the settlement of Aianteio - to find it follow the footpath that extends 350 meters north of the end of Euripedes Street.

Known for being the summertime home of actor Tom Hanks, the small Cycladic island of Antiparos has its very own geological A-lister in the form of the Kataphygi.

Kataphygi is a "refuge" cavern in the southeastern part of the island. Visitors are greeted by a huge stalagmite at the vaulted entrance, and the history is vaunted: it is said that a band of would-be assassins of Alexander the Great once hid out here. There are also famous inscriptions on some of the stalactites, including those of a 17th-century French ambassador and King Otto of Greece.

The cave itself has an area of 5,600 square meters and a depth of 85 meters. You descend a cement staircase of 411 steps to reach the three chambers including the poetically named first one: Thalamos ton Petrinon Katarrakton or Chamber of the Stone Waterfalls.

Of the numerous caves in Greece, few will light up your Instagram feed like Melissani Cave on the eastern side of the island of Kefalonia in the Ionian Sea, outside Sami.

Surrounded by forest, it was a Cave of the Nymphs in Greek mythology, but what makes it truly epic is the lake inside. Thanks to the roof of one of the cave's chambers having literally caved in centuries ago, it is open to the sky.

When the sunlight hits the still crystalline water around noon the sunken lake shimmers with a spectacular blue light.

According to Greek mythology Zeus, the most powerful of the Olympian gods, was born in a cave on Crete, the biggest of the Greek islands.

Some sources put the exact spot of the thunderbolt-hurling deity down to the Psychro Cave, also called the Diktaean Cave. This one is located above the village of Psychro in the Lasithi plateau region of eastern Crete (as a sacred "peak sanctuary" it was also venerated by the Minoans).

But other accounts of Zeus' origins identify his birthplace as the Idaean Cave, found on the slopes of Mount Ida, which at 2,456 meters is the tallest mountain on Crete.

In 2014, the remains of a Neolithic couple aged 5,800 years was discovered outside the entrance to Alepotrypa, one of the cave complexes of the Caves of Diros which are situated about midway down the Mani peninsula in the Peloponnese region.

But the most spectacular part of these caves (and also the largest) is the seaside Vlychada cavern, which you can explore on a boat tour of the cave's lake that was created by the sea when it rose millions of years ago.

The excursions run for about 40 minutes, and note that it does get a bit chilly underground.

Cave of the Lakes

Located near the village of Kastria in Achaia, in the Peloponnese, the Cave of the Lakes is true to its name, with a series of 13 cascading lakes along three levels just beyond the mouth of the cave.

Once you've entered via a manmade tunnel, small suspension bridges take you from lake to lake, with eerie stalactites and stalagmites along almost every step of the cavernous way.

About 2,000 meters of the cave has been explored—what lies beyond that is anybody's guess!