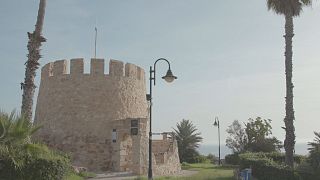 Just south of Alicante, lies the holiday resort of Torrevieja, a firm favourite with northern Europeans seeking sunshine all year round.

In this episode of Explore, we’re getting off our sun loungers and discovering a lesser-known side of the seaside town, from hiking and cycling trails in a stunning nature reserve to the town’s surprising cultural heritage.

Torrevieja means “Old Tower” in Spanish and the town takes its name from a watchtower built to defend it from pirate attacks in the Middle Ages.

Although the original tower no longer exists, visitors can explore its ‘twin’, the well-preserved Torre del Moro, located along the coastal road leading out of the town. Holidaymakers venturing away from the beaches and up the hill are rewarded with spectacular views along the coast and Mediterranean.

Torrevieja began as a fishing village and the town’s statue, the Bella Lola (Beautiful Lola) honours the wives of those fishermen and sailors lost at sea.

“The Bella Lola represents the long waits and uncertainty” explains local tour guide Maria José Minguez Mateo. “Waiting for that person, that loved one, to come back from those long journeys. Which sometimes they came back from and unfortunately other times they didn't come back”

Maria José’s family have lived in Torrevieja for generations and she is passionate about sharing the treasures of her hometown.

“There are lots of interesting things to see in Torrevieja” describes Maria José.

“If you go into the centre of the city, there is the Church of the Immaculate Conception with its square, then there are the pedestrian streets, and the Casino, which is an emblematic building, it’s very nice.”

Torrevieja is surrounded by two beautiful pink and green natural saltwater lagoons, which form the “Salinas” or salt flats.

The use of salt here dates back to Roman times but it was in the early 19th century that it became the centre of Spain’s salt industry, transforming the small fishing village of Torrevieja.

Today, it’s the largest salt producer in Europe, with more than 600,000 tons extracted per year. Much of it is used to salt the roads of northern Europe in winter.

Visitors can take a tourist train from the centre of the town to see the salt mines, and enjoy the impressive pink lagoon. The pink hue which is completely natural is apparently due to a micro-algae that lives in the water.

The salinas are located in a stunning nature park, the Parque Natural de las Lagunas de la Mata y Torrevieja, which is a protected nature reserve.

It is a haven for cyclists and walkers, offering several trails to explore the unique ecosystem.

Francisco José Martinez Garcia is the park’s Director and describes what makes the park’s flora and fauna distinct.

“Around the lagoon there are some very special plants because they are from very saline soils, so these plants form a priority habitat for the European Union.

It is also a bird watchers paradise, home to more than a hundred different species, including flamingoes.

“On the island, an island that we have, we can see flamingoes that were born this year because they are a little dark, they haven’t yet acquired that pink colour,” explains Francisco.

No visit to the region of Valencia is complete without sampling its culinary delights.

Local restaurants source their fruit and vegetables from the Vega Baja, a large plain just inland from Torrevieja. Its fertile soil and warm climate all year round mean it is known as the market garden of Europe.

Everything served up is local produce and the fresh flavours are mouthwatering.

The region is also famous for its fish and seafood and the local paella is not to be missed!

Going off the beaten track in Torrevieja is a delightful experience. From stunning nature walks to fascinating history to delicious local dishes, this part of the Costa Blanca has it all.