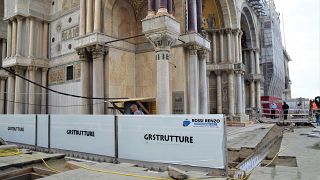 New glass barriers have successfully prevented a high tide from flooding St Mark’s Basilica in Venice for the first time.

The iconic 900-year-old church is the lowest point in the city and frequently ends up underwater during extreme weather.

Protective glass panels have been installed around the landmark to prevent damaging salt water from seeping into the building.

After a high tide on November 7, the barriers proved successful at holding back the tide.

St Mark’s Basilica stands at one end of St Mark’s Square, a particularly low-lying area of the city that’s very popular with tourists. This makes it prone to ‘_acqua alta_’, which occurs when a high tide coincides with strong winds pushing seawater into the lagoon.

Over recent decades, flooding in Venice has been exacerbated as a result of climate change and rising sea levels.

The foundations of the city are also slowly sinking, while wave impact from oversized cruise ships is damaging masonry.

Venice Council records show that flooding has become more frequent and dramatic lately. In November 2019, Venice experienced one of the worst high tides in history, causing over €300 million worth of damage.

Since then, a barrier system known as MOSE has been put into use, successfully holding back the tides.

However, the inflatable yellow parapets are currently only activated when an ‘_acqua alta_’ of 110 centimetres or above is forecast.

As some areas of St Mark’s Square lie at just 80 centimetres, it remains vulnerable to frequent flooding along with the basilica.

The atrium of St Mark’s Basilica is the lowest point in Venice and the most at risk of flooding.

Repeated salt water flowing into and out of the 11th-century church has caused irreparable damage already.

The mosaic and stone floors are crumbling, marble columns are being eaten away and golden mosaics high up on the walls are suffering from rising dampness.

After the exceptional ‘_acqua alta_’ in 2019, Carlo Alberto Tesserin, who oversees the historic preservation of the basilica, described the building as having “aged 20 years in a day.”

How is St Mark’s Basilica protected from flooding?

The new transparent barriers, which were erected around the historic monument last month, have now successfully kept a tide at bay.

The glass panels are sunk into the pavement around the perimeter of the church and measure around a metre high.

The wall is intended as a temporary solution until work will be carried out to raise the pavement level of St Mark’s Square.

Writing on Twitter, tourism councillor Simone Venturini praised the structure and added, “Now it’s time to accelerate the completion of the MOSE works for definite safety of the square.”